Around 10 years ago, the images on the Sydney Opera House for the Vivid Festival set new standards in projection mapping and delighted crowds. A decade later, the industry is challenged with how to deliver the next wave of awe-inspiring projections as the public becomes used to the product that current technology can deliver.

Pete Lynn is the Head of Creative Projection at the Technical Direction Company (TDC), and he outlined the next wave in architectural projection at the Integrate Expo in Sydney in August this year.

Progressive projection required harnessing new technology in both the preparation and execution phases but also involved new collaborations between technical practitioners and creatives to push boundaries.

“I feel that people do get used to it, and think its just another projection,” said Lynn. “So we have to think about engaging crowds to maintain their interest, and new technologies are ways to do that.”

Lynn said the idea of ‘storytelling’ in projections is one way forward in terms of content beyond the simple projection of images and shapes.

“For example, at this year’s Vivid there were projections from (children’s book) Snugglepot and Cuddlepie on Customs House in Sydney,” he said.

“I think there is the opportunity to engage people in stories beyond looking at a building and delve into history and stories and use the format with a little more narrative around histories.”

Lynn said he was excited by the potential for live generative content, leveraging software such as Notch to also enhance the visual content.

“With this it’s possible to take data from almost anything and use that to create an animation which is live.

“For example, you could create a video projection on a building which is streaming live data from a transport system, and this data could be translated into video animation on the building to reflect what is happening in real-time.”

The keys to developing the latest generation of projection mapping were laser light source projectors and media server technology, which allowed for brighter imaging and better manipulation of the outputs.

“Media servers are basically big computers with extremely powerful graphics cards in them,” said Lynn. “And they provide the power to play back these massive textured pixel resolution files.”

Lynn said the 2018 Sydney Opera House projections created by TDC were the first time the company had used the new generation of laser projectors on that building.

“I wouldn’t see a company such as ours investing in any more lamp projectors. They are wasteful and have an expiry date, and the lasers significantly improve picture quality both in terms of brightness and clarity.”

In addition to saving on lamps, laser projectors can be used more quickly, as the laser light source does not need to warm up.

Projection mapping has a long history, dating back to 1969 when Disney used it to animate singing heads on statues in a Haunted Mansion ride, but that technology was destined for a major reboot.

While earlier projection mapping was two dimensional planar mapping which did not account for any audience point of view and was fine for shapes with flat surfaces, the future would be in improving three dimensional perspective mapping and the UV mapped model.

In these projections, a three dimensional model is unwrapped or flattened out to a canvas with material containing mapping coordinates.

The model is assigned its texture from the two dimension material, and the camera in the media server can render the playback in real time.

Much of the improvement in the industry has come in the tools needed to prepare mapping, which Lynn noted has streamlined the process, enabling easier modelling.

He named Cinema 4D and Mapping Matter as two programs that are proving invaluable in the initial stages of any project, helping practitioners to assess the number of projectors needed based on required light outputs, pixel size, resolution and focus limits.

“Where before there were no tools specifically built for this we can now use them to really streamline the process.

“It means that something which may have taken 10 minutes to set up can now be done with the click of a button.” 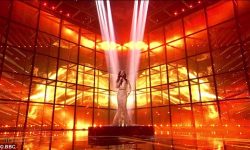